I usually grow broad beans every year, sow them in the middle of October and hope that the mice are not going to eat every single one. This year it worked, the plants grew well and overwintered fine. We didn’t have a hard winter so all was ready in March to get going. I had to prop the plants up, they grew quite tall and some of them flopped over. In the end they looked good, flowered well and only some of them got attacked by the dreaded blackfly. I pinched the soft tips and that helped. I was quite surprised today when I saw a lot of very nice pods. I like to pick the few early ones when they are quite small, the beans inside are just about visible. I use them whole, just chop them into small pieces and use them in my favourite soup – chunky vegetable one. Anything and everything goes in and I finish it with some Orzo pasta, serve with either my bread or a garlic baguette.

I also grow climbing beans, these are still in the greenhouse starting to sprout. I have toyed with the idea of sowing them directly in the ground but again thought of the mice. There was room in the greenhouse in the back garden so I’m doing it this way. 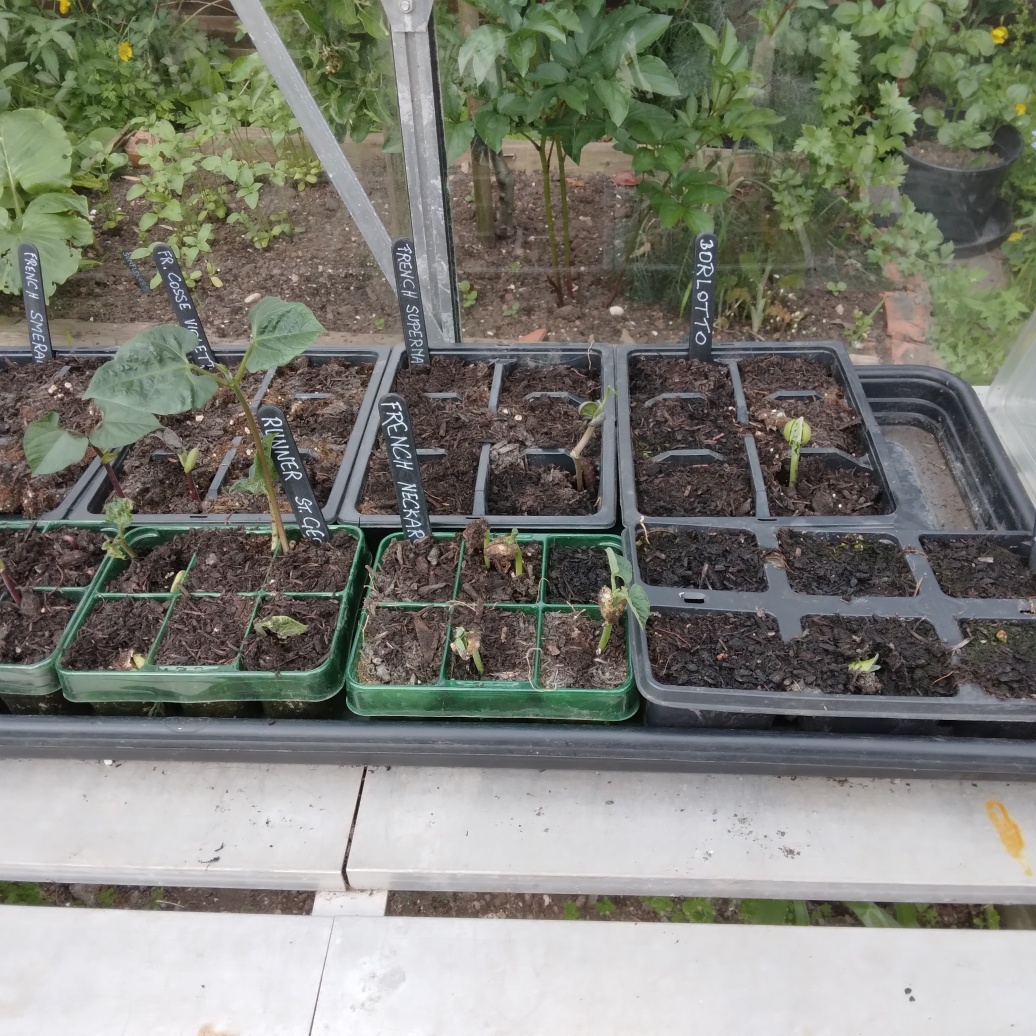 The best surprise came in the evening, as I was thinking that I should move some of my large flower pots close to the pond, stand them on the edge so the heron wouldn’t be able to perch  there. The pots have got big hostas in and the one large pot I was hoping to move has one of my Himalayan lilies in. I didn’t know if it would flower this year, they only do it every few years. Last time I had a flower on it was in May 2018 ( I checked it in the blog). I was rather surprised to see two buds on stems so that will be an extra showpiece by the pond.

The slugs like the leaves as much as they like hosta leaves so I’ll have to think of some protection.

The Himalayan lily is in flower! What a beauty, it was worth waiting all those years for this. Even better than I thought it would be.

It is getting very exciting in the back garden. My one and only Himalayan lily bulb has decided to flower – after about three years just sitting in the ground doing not a lot. even though I fed and pampered it.

It all started rather slowly and I didn’t think much of it. I moved it from its last position (where it didn’t do anything) to a large flowerpot full of rich soil and the improvement was sudden. I also feed it with either chicken manure pellets or the liquid from my wormery. Something works, it reached a height of 120 cm today and I hope it continues further. 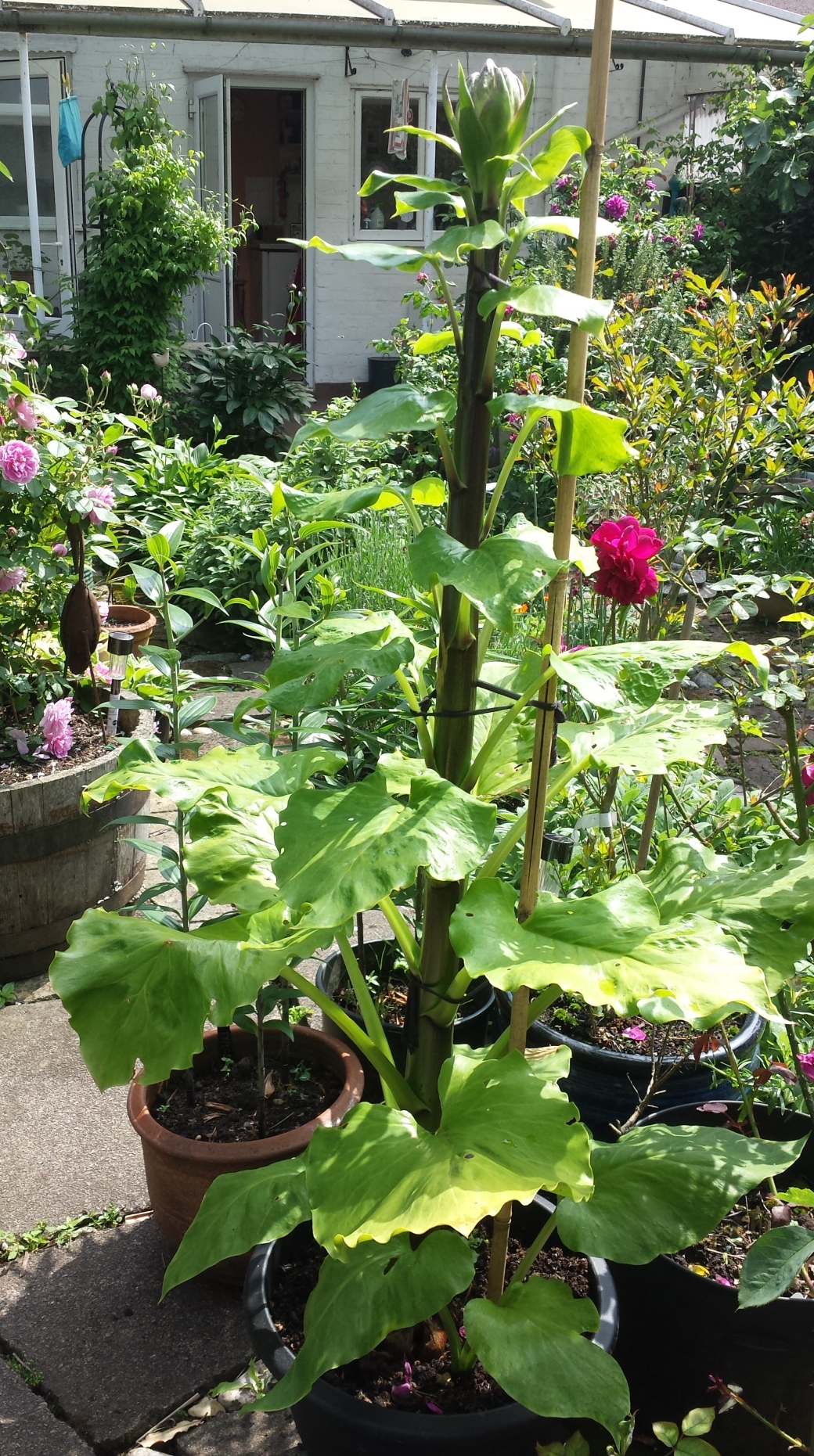 I got used to the idea that the exceptional nice weather has gone but I didn’t want this cold and wet day like today. Never mind I thought, I have got jobs I can get on with, like working in the greenhouse and dreaming.

Despite the distinct chill in the air the seedlings in the greenhouse are doing very well, they all look healthy. I have got quite a few pumpkins grown from seeds from Malta

All of a sudden my tomatoes have started growing – it was a very slow start and I almost gave up but now I think I shall have enough to fill a few of my net cages. I have been growing them in this way and I seem to avoid them being hit by blight.

One more plant I am delighted with, a Himalayan lily. I bought just one bulb a number of years ago at a country fair. So far it didn’t do anything, just produced beautiful shiny leaves but on careful reading I shall have to wait a bit more to get a flower. It looks especially good his year so I am hopeful.

It was growing in the open ground but didn’t like it very much. Moving it into a large pot with rich soil certainly improved it. As I was replanting it last autumn I managed to detach a few scales from the main bulb and planted them on the allotment in my mixed flower bed. I’m delighted to say that there are at least two lovely shiny leaves appearing.