I have been calling my allotments my ‘farm’. Little did I know that other people thought that us allotment holders are doing a great job!

Even the Guardian has plenty to say about it. After reading that I was greatly encouraged when I started my work on my farm in the morning. The majority of jobs is done, I am concentrating now on some changes and improvements.

There is a small patch of ground there that was used to be a compost heap. Well, after a number of years I turned it over and found loads of lovely soil. Last year I grew squashes, this year some beans but the site is a bit difficult to work on. Change was needed and I think I have got the perfect solution. I have removed all the wood edges, levelled the soil and removed about 4 barrow loads. These I put beside the fruit trees in the nearby orchard. Now I have a very nice square of land, big enough to plant an apple tree that I have on order from one online nursery. I will even have space there for a couple of rooted fig cuttings. 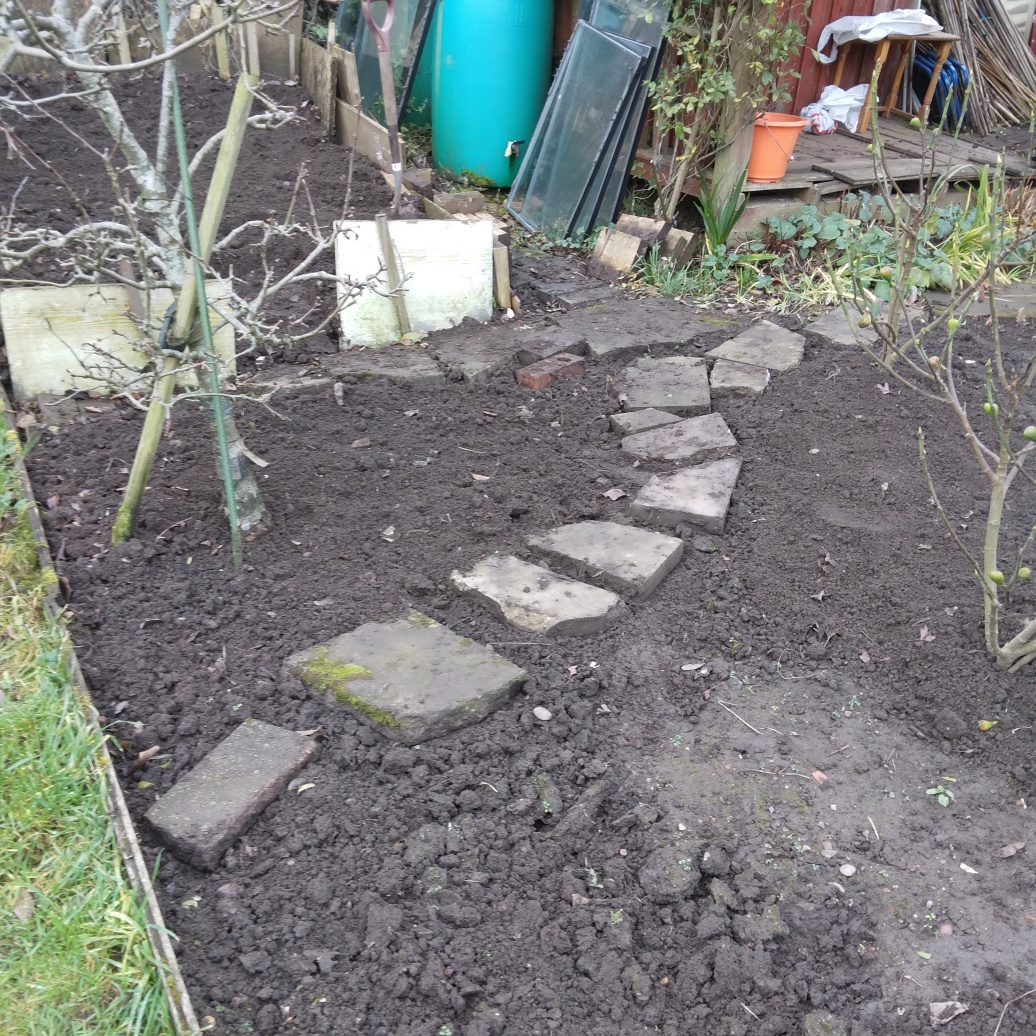 One of the most satisfying activities on the allotment is exactly what I was doing today. Using something other people didn’t want and improving my plot at the same time. In this case it was a few long pieces of wood, about 10cm profile. I think it was a part of somebody’s decking in its previous life. I have used it for mending the edges on my path and creating a border edge on my raspberry patch, to contain the plants and make it easier for the future wood chip spreading.

I have nearly finished weeding the raspberry patch – first of all I had to cut down the fruited canes and then I was able to tackle the weeds. Amazing how well they were hidden under the lush greenery. This job is almost done.

My latest little greenhouse is quite secure now, all I had to do was to put a few slabs down inside and create a little path in the front. That is all done now, the surrounding soil is hoed and all is ready for next year. I have put nine grow rings inside, it’ll be ideal for tomatoes. I keep reminding myself how good it is to grow tomatoes every time I open one Kilner jar of my oven baked tomatoes. Gone are the days of tinned tomatoes.

Even bad weather is useful for an gardener. It is still very cold for this time of year but I had to go to the allotment to check on the seedlings I moved to the greenhouses there. All is fine, even the cucumber seedlings are doing well, they germinated only the other day.

I try to do one improvement each day I am there, today was the turn of the large compost heap at the end of one of my plots. Usually I put compostable things into the composter bins, this heap is for the end of season waste – after harvesting potatoes, tomatoes, cabbages etc. It was sitting there the whole winter under a cosy cover – a carpet offcut.

I wanted to mend the retaining framework so the carpet was taken down, the Brussel sprout stalks thrown out and the rest dug over and heaped better. I was amazed how crumbly and brown it looked. 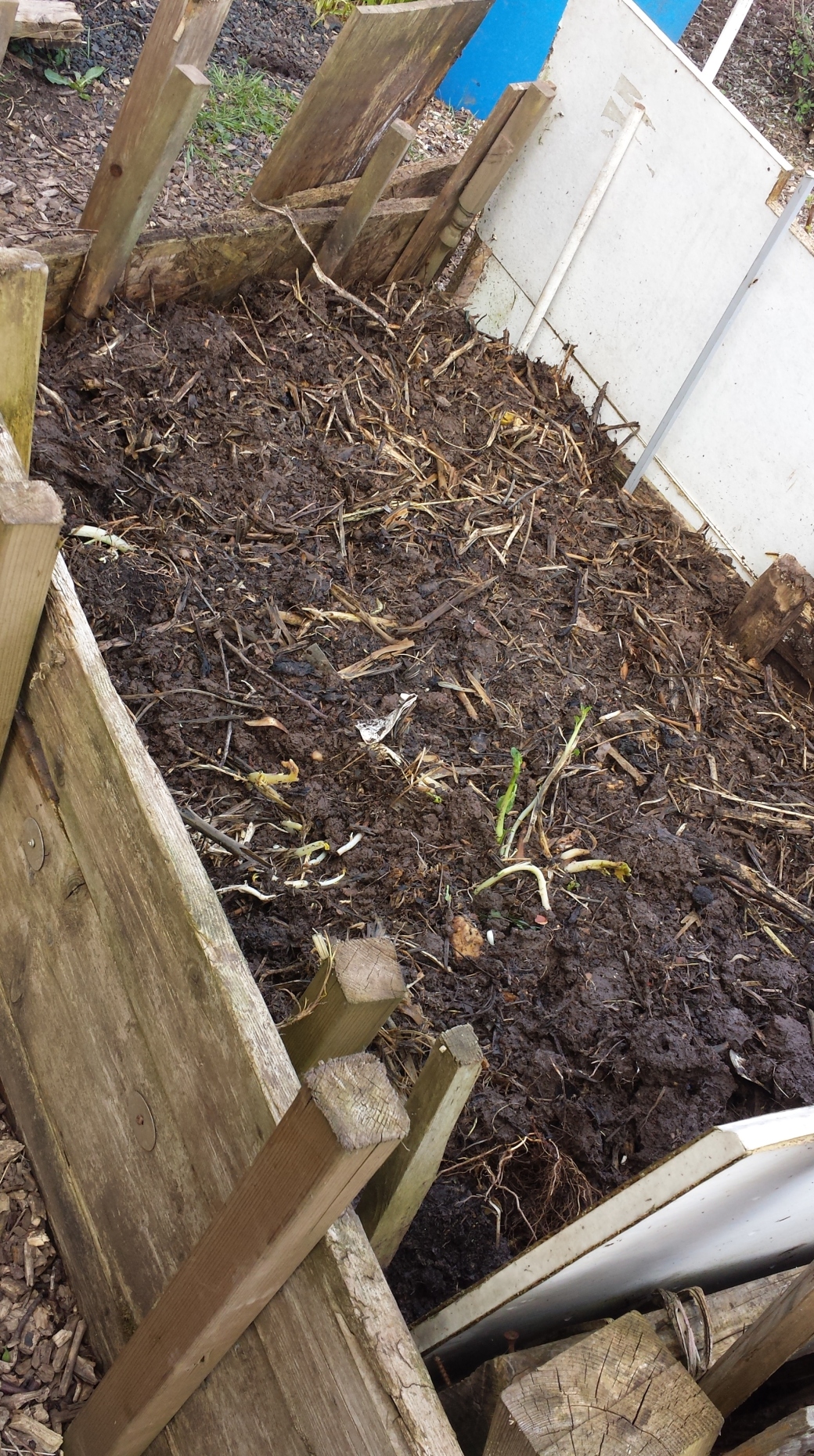 All I had to do now to water it thoroughly and cover again with the carpet. It will sit there until the autumn, I will then rake out all the good soil, either bag it or use it on the plot and start the whole process all over again. My plan is to improve the soil in the strawberry raised beds – that will be quite a lot of work but worth it. I will select the strongest runners and gradually replace the plants in the newly filled beds.

Despite the difficult situation of life with COVID 19 things are looking up on the allotment front. The days are getting longer and that is always something to cheer me up.

I have finished washing my greenhouses, the next thing was to refresh the soil and sort out the supports. After last year’s harvest of tomatoes, aubergines and chillies I took down all the cane supports – it needed re-doing.

I have also decided that ‘less is more’ and will limit each greenhouse to one type of vegetable and will space them further apart. 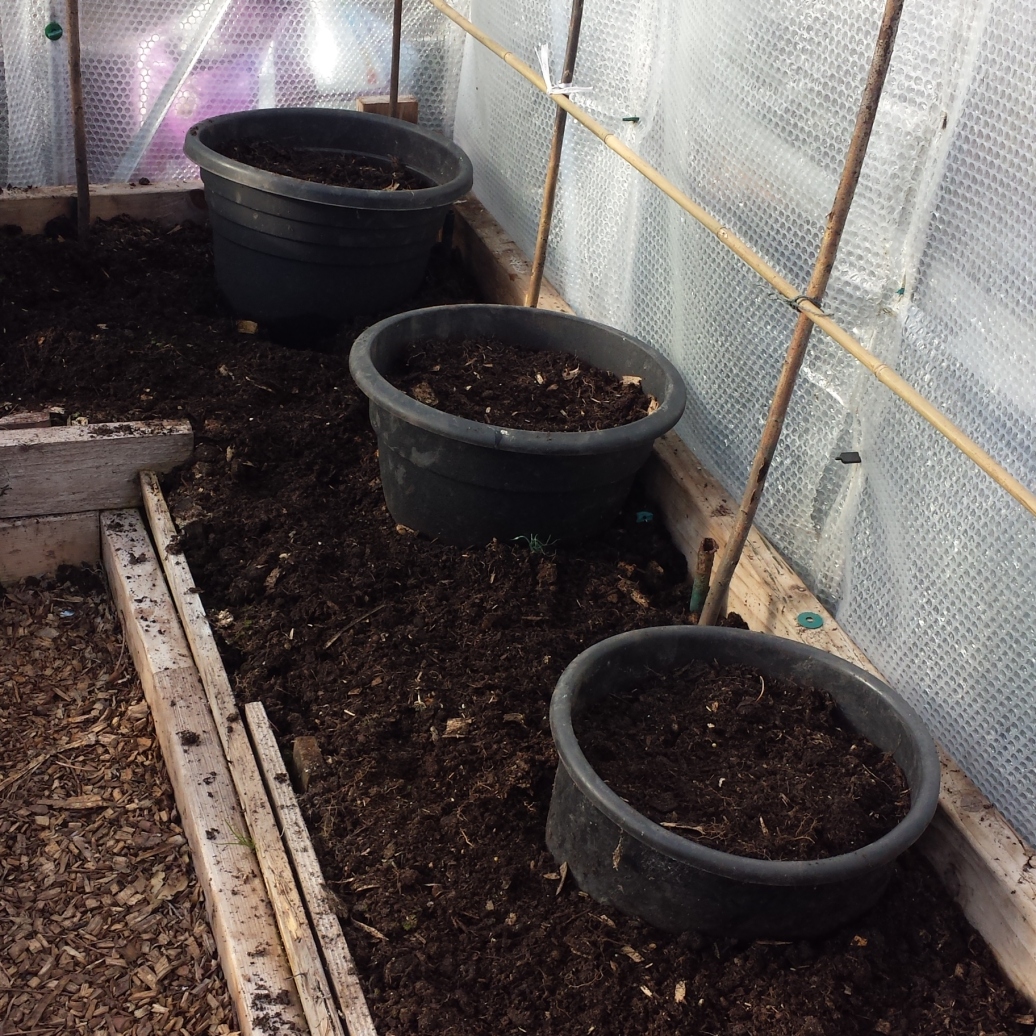 As I was looking at my Asian pear tree and planning how much to trim it – it has gone rather tall and the top branches are very thin and straggly, I noticed a nest in the fork of two larger branches. It looks a bit scruffy and untidy but it certainly is a nest. Perhaps a pigeon’s nest?

Here we go again – another autumn, another clear out operation. My plan is quite simple – I aim to complete one task each time I go to the allotment. Yesterday it was clearing out one net cage and weeding (again) a bed after garlic has been harvested some time ago.

Today was the turn of the orchard. Managed to weed, hoe and re-do the stepping stone path in front of the shed, I’m happy with the result. 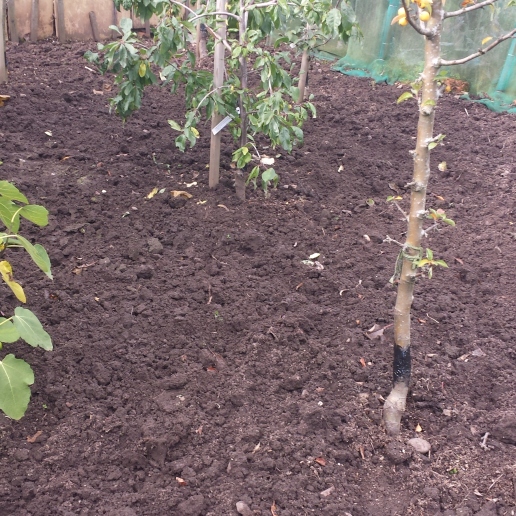 Another job I finished today was weeding and digging inside one small net cage. I had some broad beans there, they did very well, no sign of any blackfly, then I put some tomatoes and celery in. The tomatoes have finished, just the celery remains.

Yesterday was quite difficult. I have decided to put a scaffolding plank as an edge to a narrow strip of soil beside this net cage, to keep the soil in, and making it deeper. I knew the planks are heavy, but I didn’t think they were this heavy! Too late to change my mind when I was half way down the main path dragging it behind me. Never mind, it all ended well. 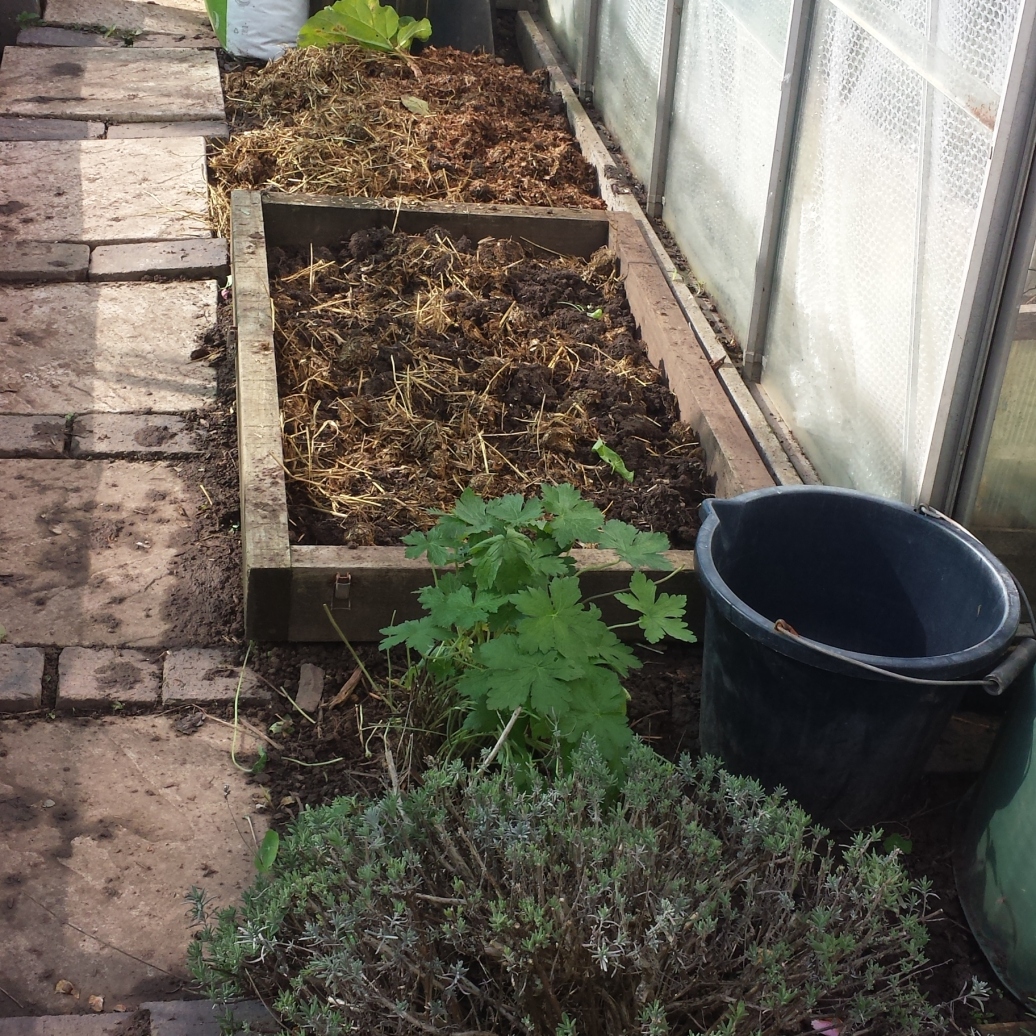 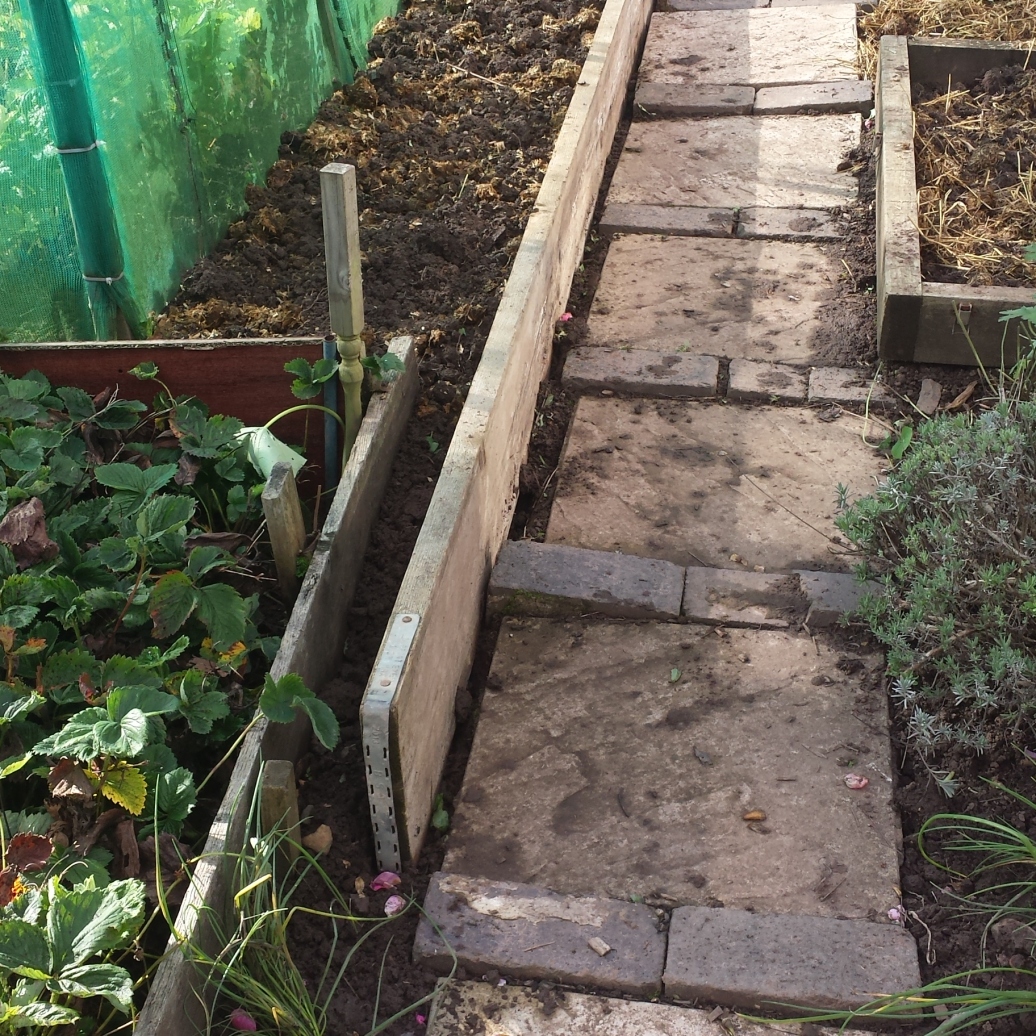 Quite a lot of houses in the neighbourhood are in process of being either renovated or, more the pity, turned into houses of multiple occupancy, eg. student accommodation. That means the workmen are removing a lot of fitted cupboards and such like and this is where I come in. My motto – if you don’t ask you don’t get – works every time. Rather than putting the planks etc in the skip, the builders usually keep it to one side for me and I take it to the allotment.

All this will be used in renovating the paths – not all of them, some are fine with grass surface but some are too narrow or uneven to maintain well. Having the wood chip on will keep them tidy and mud free.

Waste not, want not!

I have a number of compost heaps on the allotment – and as I have three plots I have one at the end of each plot. So far I have turned two of these into new growing areas, because the soil there was just amazing, after 10 years in one case and about five in the other.

The latest project started yesterday when I uncovered the last heap – it was covered with an old carpet, just to stop nettles and suchlike growing on top. I was amazed – after five years the whole lot turned into a large pile of crumbly brown soil.

As it is right at the end of the plot, behind the raspberry patch, that was the easiest solution – use the new soil as a mulch because this patch hasn’t been fertilised recently.

I have cut them down and started emptying the heap. It was quite easy because when I constructed it I knew I would have to do this one day so I made my life easier. It worked. Surrounding wood taken off and a barrow after barrow was spread on the raspberries. Haven’t finished as yet – rain stopped play. Everything rotted down very well, all I found were some bindweed roots occasionally. 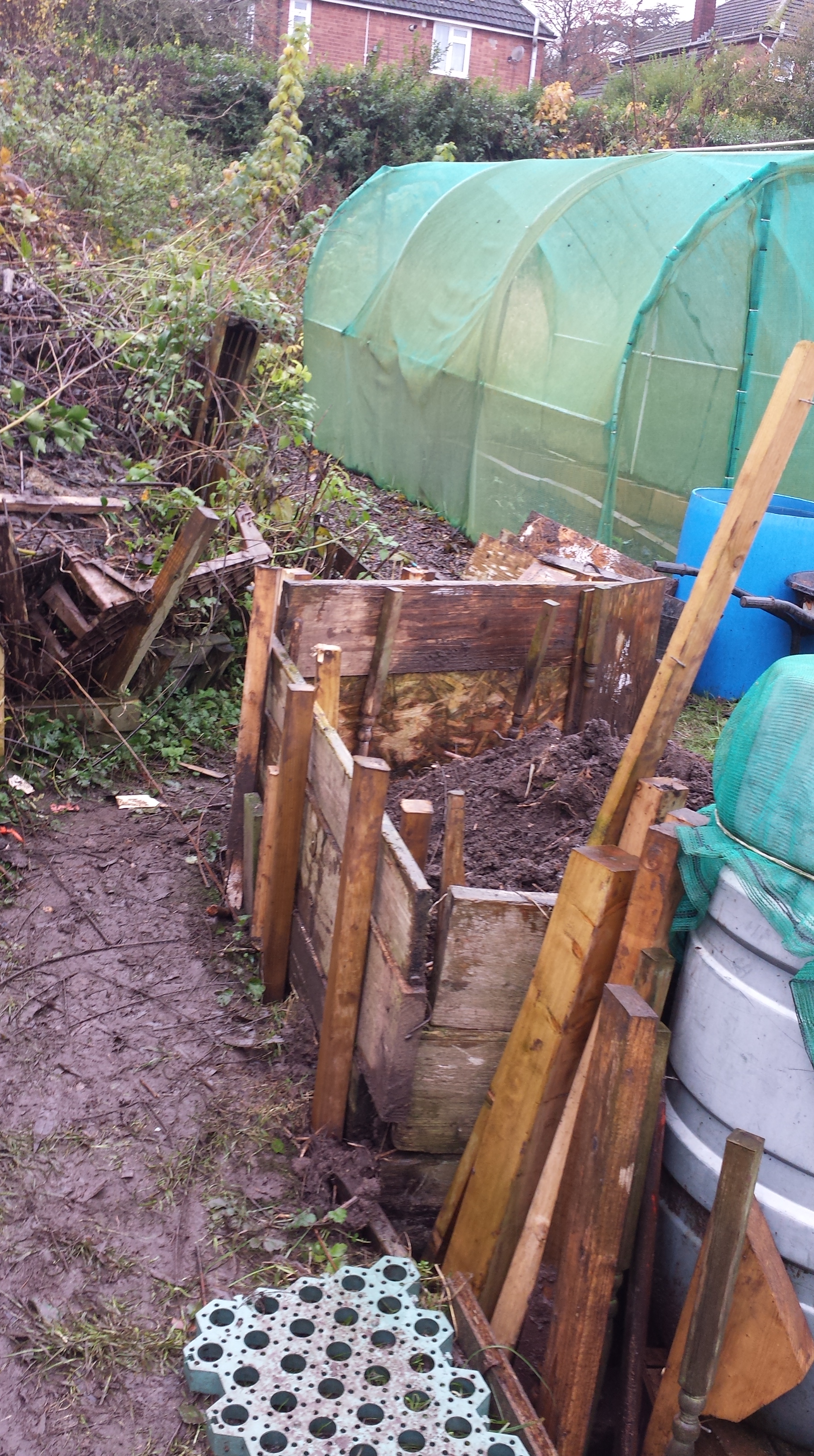 All the same, I managed to start a bit of rebuilding, I needed to tidy it and also to widen the little path. There is a bit more to do with the last pile of compost, that one will stay as it is for quite a while, there is too much wood on top for it to be useful. But the side will need to be straightened.

Today was another lovely day, there was work to be done so I had an early start.Yesterday I managed to pollard the ancient willow – well, three of the stumps and there were another three waiting. Also I had a very useful find in the very back of the plot where it just looked like another compost heap. The two guys who had the plot before me were equally untidy and instead of taking their plastic pots and bits of netting home to throw away they just dumped it there and covered with soil. Amongst all this lot I discovered a ladder – one of the old-fashioned ones, a wooden one and that came very handy yesterday and especially today. I was able to climb high up and trim one more of the stumps and then Frank came to help and finished it all. 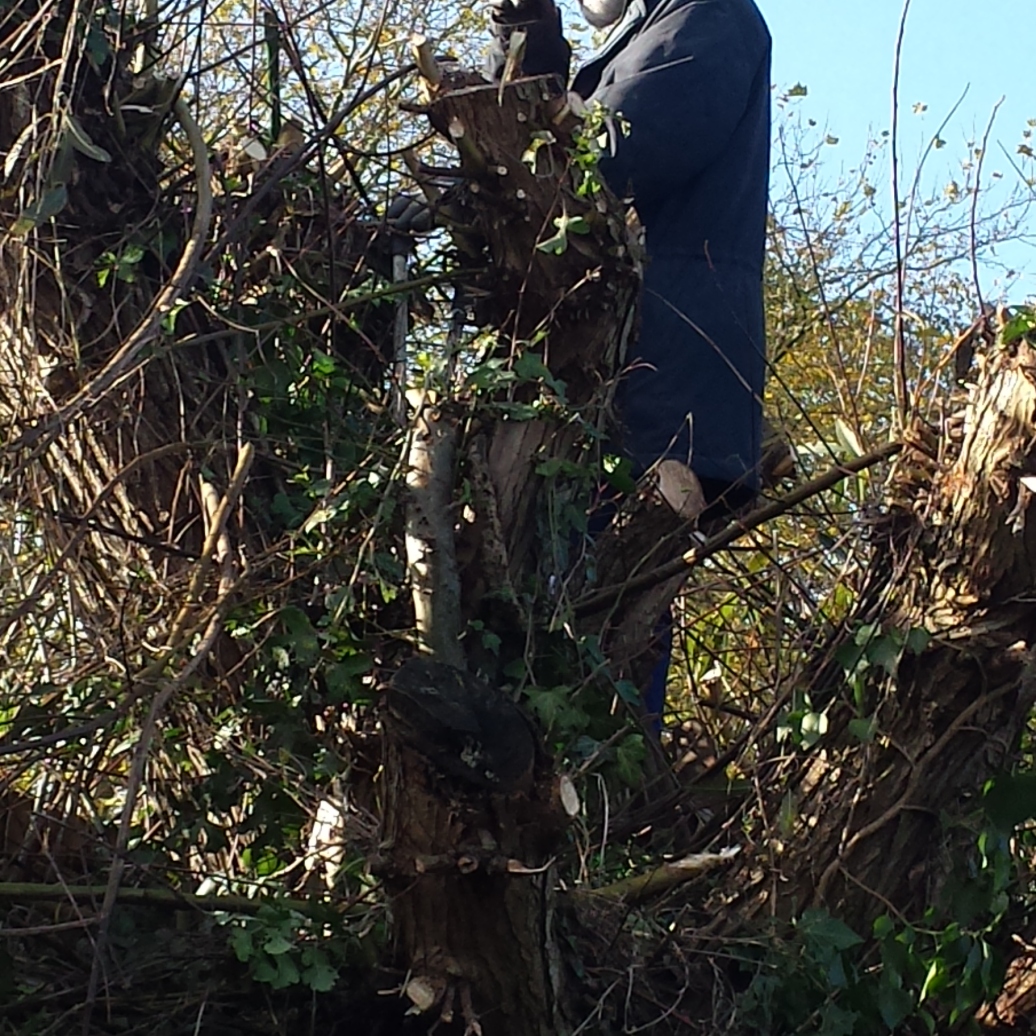 Not only the tree is done but also I gained another growing area. There was so much good soil along the fence that I took a number of wheelbarrows off and put in on another part of the plot where the soil is a bit heavy. This has left a nice border, one end has got a palette to keep the soil in and along the path is a low fence. I shall grow squashes and a pumpkin there next year, they’ll have enough room to run.

I shall dig it over to find more rubbish and some unwanted nettle roots but otherwise it is ready.

Yesterday and today was maintenance time – trimming the back hedge. Amazing what can be done with just one bow saw and long-handled clippers! 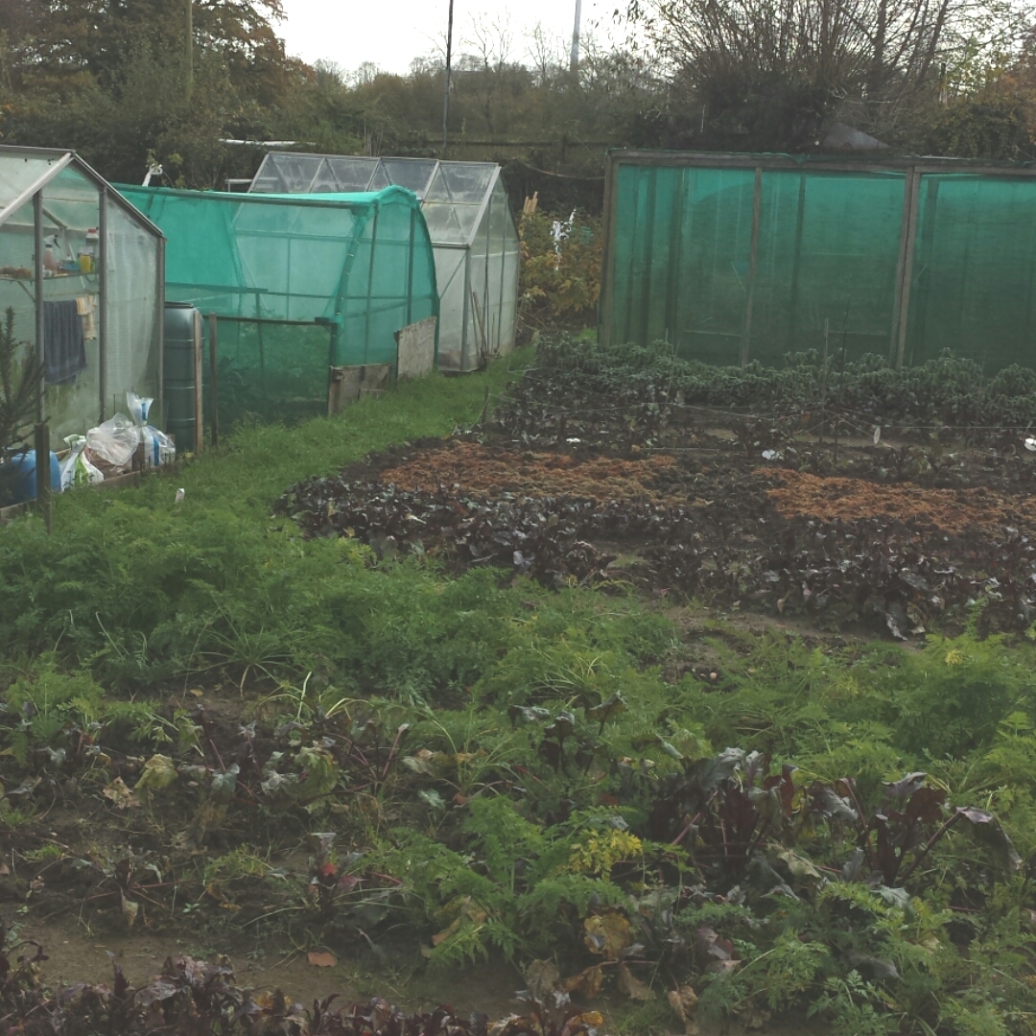 I have so much more light on the plot now. It is the ideal time to do this job now as we’re ready to have a huge bonfire. Some of the cut branches fell between the fence and the hedge, an ideal habitat for the hedgehogs!

This time I’m working on renovating a path between one of my plots and my neighbour’s plot. Dave hammered in some sturdy supports along the whole length of the path on his side – because our site is sloping down, there is a deep step between my plot and his. This path was always a bit problematic but I think we’ve sorted it out now. Dave has got some soil from his back garden at the back of his property so we’ve been taking it in wheelbarrows to the allotment. Fortunately he lives very near but all the same, it is quite tiring. 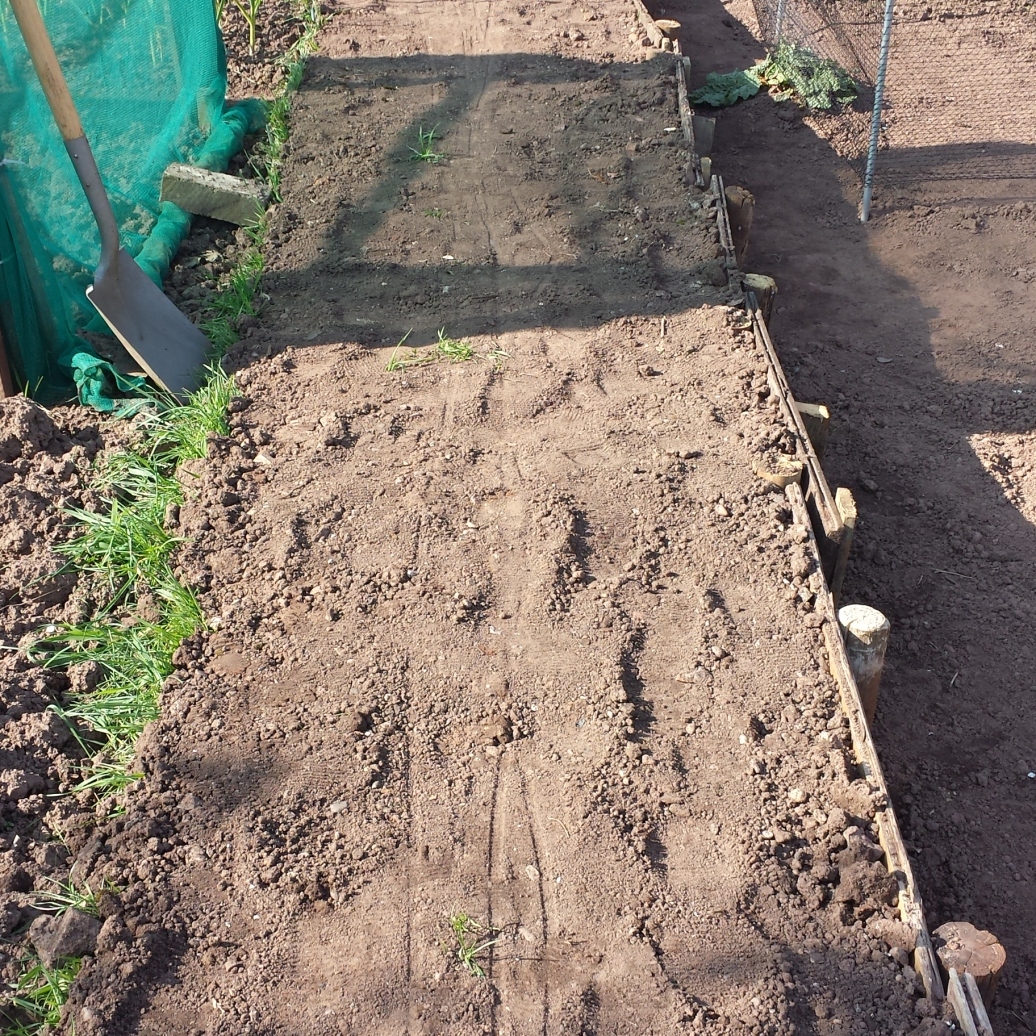 This will make our lives much easier from now.