Even though the weather is still quite unsettled and un-spring like I decided  to plant my Spagna Bianco beans out. I waited quite a while before I started them in pots in the greenhouse but they grew at an alarming rate and very soon were trying to get out of the greenhouse. I put the whole tray of them in the veranda to harden them so I think they were quite tough when they went in the ground. I didn’t want to take chances so I built a little fleece fence round them, perhaps just for a bit of protection from the wind.

There is also one line of them but this didn’t get any pampering because these are just beside the net tunnel and that seems to keep the wind off them. 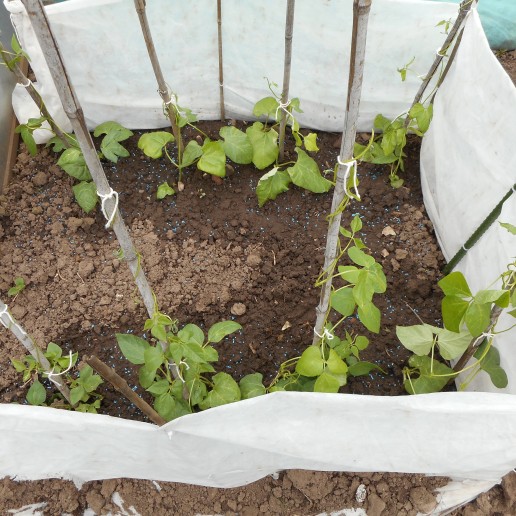 The next job was to plant something in the four empty cold frames. I had radishes there, harvested them and now they were ready.

I have grown five bush courgettes, ideal for this, hopefully they’ll just sit there and produce loads of tasty fruit. One cold frame had to have two courgette plants but I don’t think this will matter. If it gets too overcrowded I’ll just carefully take one out and plant is elsewhere.

The last job was planting some more lettuce seedlings in the polytunnel. The first batch are doing very well and the four cucumbers as well. I had one tray of lettuce, one cucumber plant and one ‘mystery’ plant. It looks like a squash, courgette or pumpkin – the label got lost in moving. We shall see. 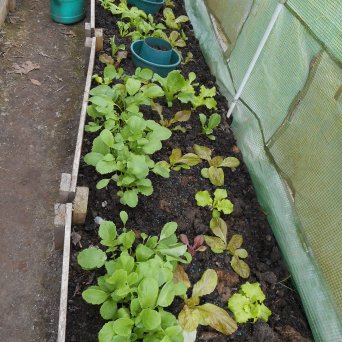