My parsnip harvest last year wasn’t bad at all, they kept well in the ground and I pulled the last ones only a few weeks ago. They were also quite large and straight but all the same, I thought I’d experiment a bit.

I am not into growing giant vegetables but I thought I would borrow a bit of the idea behind growing massive parsnips. I didn’t want to have huge barrels of sand and then some tubes in the middle and just having one parsnip there – after all, I just want to grow them to eat!

I’ve acquired some sharp sand and my plot of land where I wanted to sow the parsnip seeds was ready so I made a fairly sizeable furrow with my new azada, filled it with sand, then crumbled some fine soil on top (enough to give the seeds something to germinate in and watered it. I sowed the seeds carefully in and gently covered with a thin layer of soil. 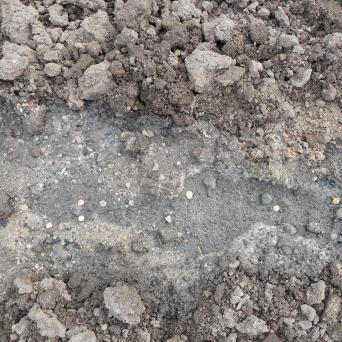 There are four rows with sand and two without, just to see how it will/or will not work. It is worth trying, I don’t mind and perhaps I’ll learn something new. The variety is the same as I had last year – Tender and True and Gladiator – I know they do well in my soil.

Fingers crossed we shall have a good harvest.